Chefs Around The World, Cookbook, 2009

Chosen to represent Vancouver art by Iron Chef Rob Feenie. Athena’s work is displayed alongside the chef’s creations in the new international Chef’s Around The World cookbook by Eckart Witzigmann. 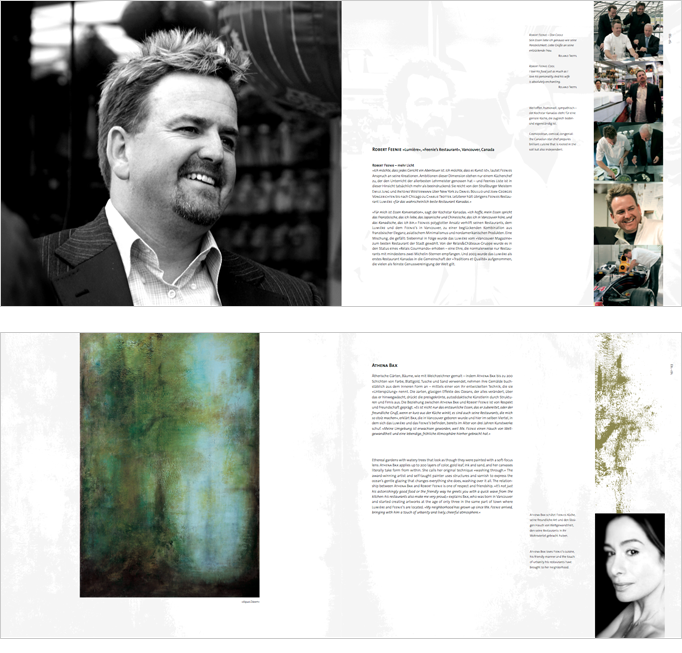 Ethereal gardens with watery trees that look as though they were painted with a soft-focus lens: Athena Bax applies up to 200 layers of color, gold leaf, ink and sand, and her canvases literally take form from within. She calls her original technique »washing through.« The award-winning artist and self-taught painter uses structures and varnish to express the ocean’s gentle glazing that changes everything she does, washing over it all. The relationship between Athena Bax and Robert Feenie is one of respect and friendship. »It’s not just his astonishingly good food or the friendly way he greets you with a quick wave from the kitchen: his restaurants also make me very proud,« explains Bax, who was born in Vancouver and started creating artworks at the age of only three in the same part of town where Lumière and Feenie’s are located. »My neighborhood has grown up since Mr. Feenie arrived, bringing with him a touch of urbanity and lively, cheerful atmosphere.«

Athena Bax loves Feenie’s cuisine, his friendly manner and the touch of urbanity his restaurants have brought to her neighborhood.